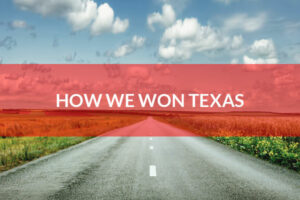 In February of 2013 the Obama Team announced that they were going to start Battleground Texas and “end GOP dominance” in the state. By that September they were on pace to register 600,000 new voters.  By Election Day 2014 they had raised more than $10 million dollars and had recruited tens of thousands of volunteers.

Greg Abbott, who was running for Governor, became their number one target. Abbott decided he didn’t want to just win the race for Governor, he wanted to stop Battleground Texas in its tracks. He wanted to turn the Obama Team’s dream of turning Texas blue into a nightmare of total Republican domination.

So we built the largest field operation the state of Texas has ever seen, and focused its efforts on metrics that mattered.

Too often campaigns waste time worrying about motion, not caring if progress is being made. They look at how many impressions an online ad receives; how many gross rating points are behind a television ad; or, how many calls a phone bank makes.

None of these things matter.

Campaigns need to look at how many favorable voters they identify, how many targets an ad persuades, and how many voters an email moves to vote. The purpose of the campaign is not to talk to the most people, it is to turnout the most votes. That is how success should be measured. And that is exactly what we did for the Abbott campaign.

Which volunteer is more valuable? The one who rushes through calls and makes 200 dials in a night?  Or, the one who only talked to 50 voters, but convinced them all to get out and vote. By standard campaign metrics volunteer one would get a gold star and volunteer two would be “the guy who talks and talks to everyone he calls.”

Our campaign never asked field staff to make a certain number of calls or knock on a certain number of doors. In fact, our field team had the freedom to do their job as they saw fit. All we did was require them to identify 250 Abbott supporters every week. Some of them spent a lot of time knocking doors themselves while others organized volunteers and never talked directly to voters at all. All that mattered was delivering results.

At the end of the campaign our field staff was able to identify more than 1.9 million pro-Abbott voters. That is more than 70% of the voters who ultimately turned out in support of our campaign (and would have been enough to win the election).

So what did the Obama team’s Battleground Texas program get for it efforts? A shellacking. Republicans picked up four new state legislative seats (including Wendy Davis’ old Senate seat). 25 counties that had voted for the Democrat in 2010 went for Greg Abbott – including Bexar and Harries counties. Republicans flipped a Congressional seat.  And, Governor Abbott beat Wendy Davis by 20 points.